Aquaman: Death of a Prince

There is a certain plot structure in superhero comics that can be taken as a pretty certain indicator that you're reading hack work. …All right, there are several, but the one I'm thinking of right now is this one: The hero has a confrontation with a villain, and loses. Basically having the hero at his mercy, the villain then retreats, shouting a threat – something like "you stopped me this time, but next time I'll finally succeed in killing you!". Subsequently, the hero searches out the villain and defeats him. The end. 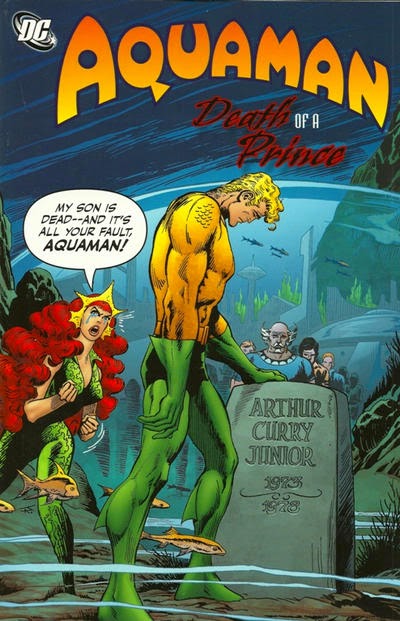 There's plenty of that in Aquaman: Death of a Prince. To be honest, the whole collection sort of sucks.

Plenty of creators worked on the stories in this collection – mainly Mike Grell, Jim Aparo and Don Newton & Dave Hunt on the art and Steve Skeates, Paul Levitz, Paul Kupperberg and David Micheliene on the writing. The Grell part seems to be very early in his career and the figure drawing and inking felt a bit awkward IMHO; the Don Newton chapters suffer from him not being really suited to action stories, he was far better at mood, and the Dave Hunt inking doesn't convey the elegance of Newton's shading that I've seen in some of his Batman stories; and the Jim Aparo chapters (the main part of the book) are gorgeous, and practically the one redeeming feature of this collection.

The writing, as hinted at above, is pretty terrible. Apart from the villain-has-hero-at-his-mercy-and-flees scenario, there's also plenty of that perennial favorite, the-supposedly-inescapable-trap-that-the-villain-leaves-the-hero-in-and-leaves-because-he-has-"better"-things-to-do. Finally, the writers also kill off Aquaman's son in more or less a throwaway story arc, which ticks me off in more ways than one.

First of all, I think it's a sign of lack of respect towards one's characters to casually throw enormous tragedies their way. They're not real people, I'm well aware of that, but just using them as playthings still rubs me the wrong way. If you don't have any respect for your characters, why should the reader? Second, if you do subject them to horrible tragedies, you owe it to the reader to explore the consequences of that. Here, Aquaman looks sad for a couple of panels, then goes back to fighting bad guys with just occasional thoughts about how sad it is to have lost his child and occasional stereotypically depicted outbursts of anger. The deep grief displayed on the (Jim Aparo) cover? Well, that's the sort of characterization writers like Michelinie or Kupperberg are really capable of; they're better at glib dialogue and stock plots. (Yeah, that's kinda harsh, but that is basically all they deliver here, as in most other stories I've read by them.)

Oh, and I don't like the depiction of Mera, Aquaman's super-powered wife, either; she's way too much of the stereotypical, wide-eyed, near-helpless girl. (Until her son is killed and she starts hating Aquaman in a sort of crazy manner, of course, but that's not really an improvement.)

So is this a terrible book? No, not entirely, and that is all thanks to one man: Jim Aparo. His very clear, very strong and muscular (I almost typed "virile", which still wouldn't have been wrong) artwork saves this from being a total disaster. He can't save it from being bad, but he can actually make it worth your while to suffer through the bad writing, just to marvel at the power and clarity of his art. This is Aparo at the top of his game. Much like another old pro, Joe Kubert, he could make bad stories – well, not good, but let's call it aesthetically enjoyable. And plenty of today's comics artists could learn a thing or two from guys like Aparo on how to combine power, excitement and clarity of storytelling in one fine package.

So, not recommended. This is not good comics. But if you want to enjoy some very good comics artwork, you can get this one just for Jim Bloody Amazing Aparo.

OK, so I created this comic, see…


… and it took a while. I'm not exactly what you'd call a professional comics creator – I make roughly half my living from the comics business, but that's mainly as a translator – so I've never been pushed to produce comics on a regular basis. (Well, except for during a rather cash-depleted period around the year 2000, when I wrote one or two 91:an stories per month because I absolutely had to. Fortunately, I got a job that eliminated that need just about when I ran out of ideas.)

Anyway, several years ago, I had this idea for a comics character after a run-in with a bunch of, shall we say, somewhat intoxicated youths. It didn't turn violent, but it felt like it easily could have, so I – being something of a neurotic – started thinking of what I could have done had it actually turned violent.

The answer I reached was, not a whole lot.

But my imagination had been kick-started, so I started thinking of things you could do if you were, well, the sort of person who could do those things. And then, having grown up on a steady diet of adventure comics (and similar stories in the film and TV series formats), I let my imagination run with the concept. Turned out I felt I had a potential hero in the works, and it also turned out there were more situations I could imagine him in. However, only delivering his tough-guy lines to crooks and the occasional police contact started getting tiresome pretty quickly, so I teamed him up with an older, more experienced partner so's he'd have somebody to talk to – which would also help me with exposition.  As it turned out, the older agent was a natural choice for those cynical lines, leaving the original hero as more of a straight man in their banter.

Anyway, this changed the dynamic of the situations I imagined my by now two heroes in. One concerned gaining entry into an apartment when two armed bad guys tried to stop them – first by subterfuge and then, when that doesn't work, through violent means. (Fortunately, there wasn't a large window by my door, so the neighbors couldn't see me when I acted out the scene by myself to check that it actually worked.) The experienced agent immediately took the lead, leaving the "junior" partner somewhat shocked by his capacity for rather ruthless violence.

So I now had one working action scene. What was missing was a story to put it in. I started thinking about reasons why the pair of heroes would need to gain immediate entry to the apartment, and picking from a wide range of stock situations from the world of action/thriller/adventure stories that exist in the world of fiction, I picked "kidnapping". From there, I had to work out who was kidnapped, why, by whom, how my team of heroes got involved and how they found the place where the kidnap victim was held, and how it all would end. Somewhere along the road, my original hero had a sex change.

See, looking over the story, I suddenly realized that I had exactly one (1) woman in the story, and that was the kidnap victim. Now, I'm not a fan of the Bechdel rule; I think a work of narrative art stands on its own merits regardless of the genders of the characters, but I'm also not a fan of too stereotypical story structure, so I made a few changes. I could have made the older, more experienced agent female, of course, but I felt it more likely that the more experienced agent would be male; after all, traditionally, women have not participated in actual fighting to the same extent as men – and as the adventures of my heroes, Monica Mildh and Erik Fromm, will involve quite a bit of, shall we say… probability-bending, I think it's important to base as much as possible of it in an at least seemingly-realistic world, not straining the reader's credulity except when you really have to. (And yes, Erik's name is indeed inspired by the late, great psychologist and philosopher Erich Fromm. It is also a pun, though: "mild" means mild in Swedish, just as in English, and "from" means pious.)

Anyway, to cut to the chase, I solved the various problems that had to be solved to make the story work (which doesn't make it a great story, of course; it just means that it doesn't fall apart at first glance like a standard Hollywood action movie) and wrote a script, and set about finding an artist. That wasn't exactly easy, and in the end, I had to go outside of Sweden's borders to find the skillful and very professional Carlos Pedrazzini. I sent him the script, he sent me his pencilled preliminary pages, I put in the text so's he'd know how much space the speech balloons would need (and occasionally asked him to change something) and he produced inked and colored finished pages. Finally, I lettered the whole thing in Swedish and sent it over to the Swedish Fantomen (The Phantom) comic book, where it is just now being published, in issue #6-7/2014. 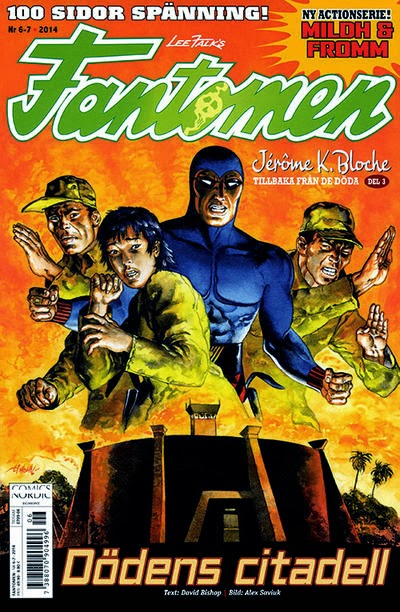 Now, my hope is that Mildh & Fromm will be sufficiently favorably received by the readers that the editor will buy more of their adventures, as I have 6-10 more stories about them in various stages of readiness, from finished script to rough plot, but you never know. Nevertheless, it has been exciting to try and create my own comic, and I'm grateful to Carlos Pedrazzini for partnering with me to make it a reality.
Upplagd av Göran Semb kl. 11:35 Inga kommentarer: 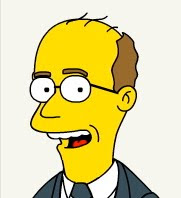